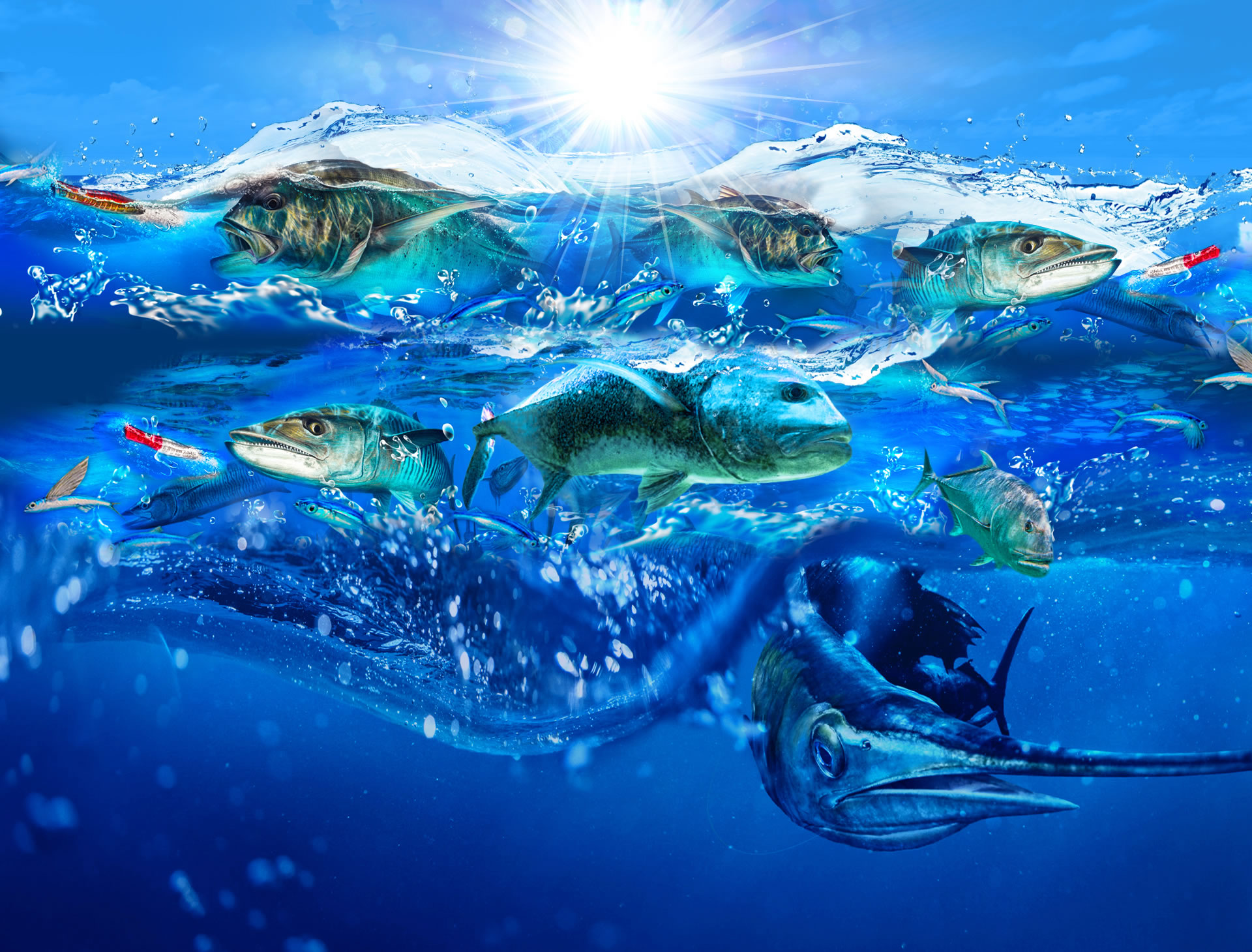 We started with a few drifts over some new ground where we didn’t get much excitement . A small move to the next spot and the sounder lit up with fish. We quickly baited up and repositioned for our drift. Within seconds all 3 rods were well and truly bent over. With a bit of heavy breathing involved the guys landed 3 solid Large Mouth Nannygai. When Nannygai are really on the chew the school will tend to stay with the boat as it drifts. This is certainly what happened on Sunday as we only did 2 drifts and we had an esky full.

It was great day on the water when Bobbie Pick and his son Kale cashed in the Action Charter vouchers their family had bought for them for their birthdays. Luckily they were able to team up with Nathan and Brandon from Instant Power Electrical Mackay to make up a crew. Light winds and smaller tides had the fish on the chew and large eskies had to be borrowed at the end of the day to allow the guys to take home the catch. Brandon might not have had much experience fishing in fifty meters of water but he claimed the stand out fish, an 80cm red emperor. He also caught the best nannygai, a 20 kilo cod and the largest Trevally.

It was a fantastic day when David McGrath and his wife Rachel shouted his father Tony and brother Michael a day on the water with Action Charters. Leaving the Mackay marina at 05:30, the crew had lines in the water by 0700 with a succession of smaller Nannygai and arm stretching Trevally soon hitting the deck. Moving further east into the shipping channel saw the quality of the catch improve with a succession on red emperor adding to the tally on ice.The action was halted for a while after David hooked “the unstoppable”, with Michael tag teaming his brother in an effort to bring the beast to the boat.After fifteen minutes and with both guys’ arms screaming, they admitted defeat without seeing what was most likely a large tawny shark or something similar. David didn’t have much rest though as a few drifts later he managed to reel in a rock-cod in excess of twenty kilos.Moving to the protection of one of the Cumberland Islands for lunch saw some quality Grassy Sweetlip captured to make up an impressive mixed bag for the family to take home.

You have to be tough to be a concreter in North Queensland. And you have to be tough to go fishing on a 5.8 meter tide with westerly winds. So I guess that makes Mick, Richie, Kelly and Matt tough. Up here, there are two things we hate as fishermen, king tides and westerly winds, and when you combine the two you know you are in for a hard time on the fishing front. The guys were forewarned but as it was their only chance for a day off. They were keen to go and they certainly made the most of their day on the water. Mick won the day with a nice Red Emperor and when combined with some Nannygai and Grassy Sweetlip, they had a nice feed to take home. They can’t wait to do it again but will check the tide times before the next trip.

As the sun rises in front of you over the Coral Sea and the sight of Mackay Marina and the mainland falling away behind a sense of excitement and anxiousness fills the air. Although its too early yet, In the back of everyone’s mind is the all too familiar sound of the sharp scream of a fishing reel spinning wildly as a monster of the deep takes the bait and tries with all his life to escape.

In no time at all, the twin 200 HP Yamaha bring you and your group of mates closer to your destination and your next chance to land the fish of a life time draws nearer and nearer. It’s the thrill of the chase, the fight and the glory of returning triumphant which attracts everyday people to the Lone Wolf.

Action Charters will provide you with a unique, extra value day trip or live on board one of the Great Barriers Reef's most exciting vessels cruising the Whitsundays or the outer reef as we cater for all your requirements. 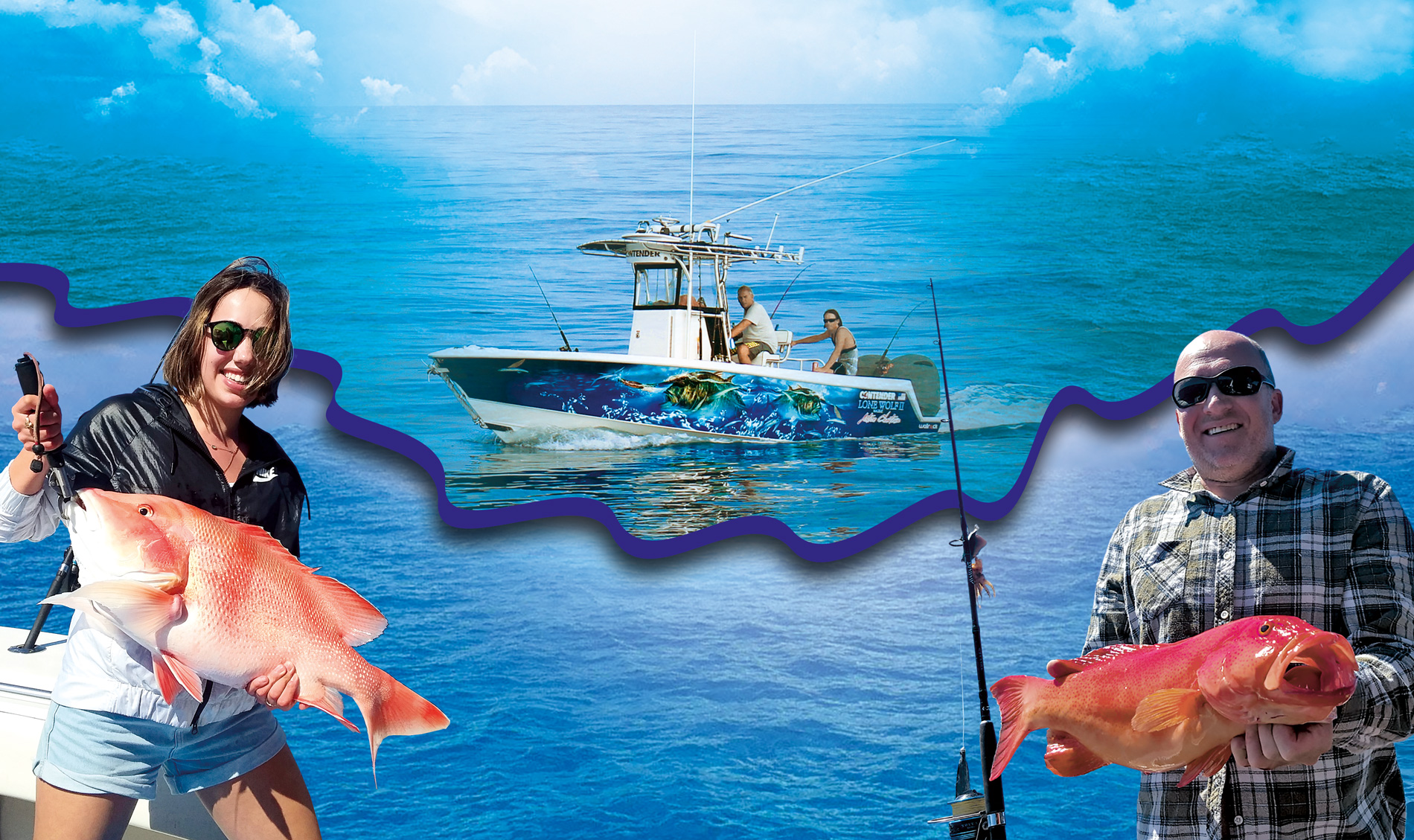 Description: Excellent way to start your fishing experience, the day trip will give you a chance to experience sport fishing and experience the beauty of the Mackay shore waters. We visit a couple of premium locations that only our knowledgeable skippers know about.
Maximum No of people: 4
Total charter cost: $1,700*

Description: When you like a little extra room, speed and stability The Gun is the vessel for you. We will spend the day chasing your favourite species and exploring the beautiful Mackay region.
Maximum No of people: 5
Total charter cost: $2,000*

Common to All our Packages

Food & Beverages: On charter lunch, lite snacks, bottled water and soft drinks are all provided. Alcohol not included, you are welcome to BYO.

Fishing Tackle: All tackle, bait, rods and reels will be provided. You are also welcome to bring all of your own tackle and/or reels.

T&C: All packages require a 20% non-refundable deposit to confirm booking. Final balance of payment is due 30 days prior to departure. Loss or damage to tackle will incur additional replacement costs.

Description: Many times we have enquiries from parties that do not have the numbers to hire the complete boat, if this is you, select this package and we will keep you in our database and compile compatible groups and before you know it, you will be fishing and meeting new people.
Maximum No of people: 5
Cost per person: $425*

Surprise your family/friends and be on the way to a great fishing adventure!

Just fill the form below and we'll send you an Action Charters Voucher(s). 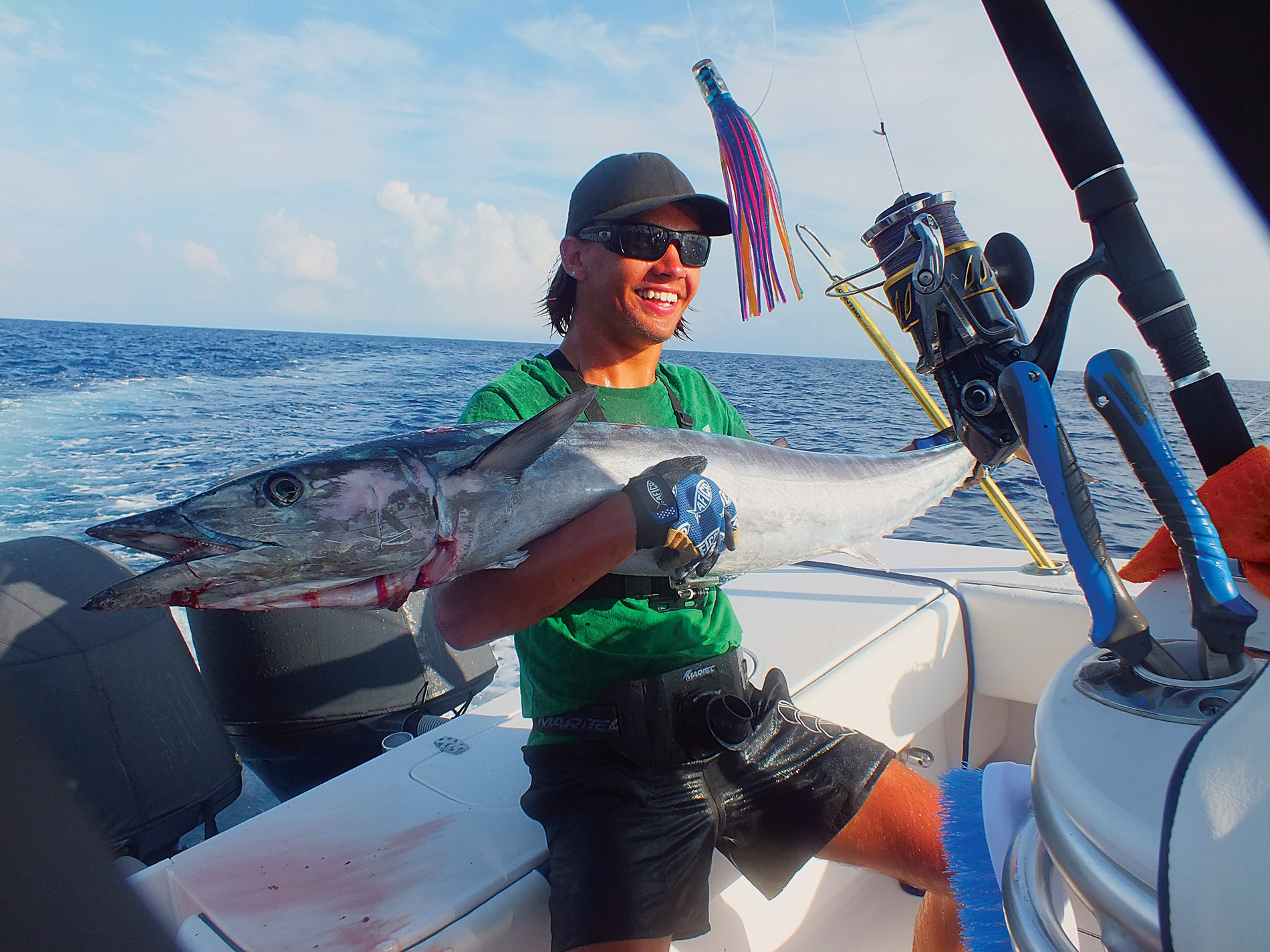 Troll for Spanish Mackerel on our fishing charter boats

Mackay is the best location on the east coast to catch these fantastic fish. Between July and November…… The hunt is on!

Spanish Mackerel, both to catch and to eat are arguably a fantastic fish. An apex predator with a body designed for speed and attack, complimented and razor sharp teeth designed for slicing and killing prey.

During this time of year many fishermen travel to this part of the world in search of hooking up to one of these great fighters in the ocean. Found throughout many tropical waters around Australia and America they are sometimes called King Mackerel, Blue Mackerel or even Narrow Barred Mackerel because of the dark bars which are evident along both flanks of the fish. Whatever they are called when a one of these is on the end of your line you definitely know about it. The initial run they make once hooked will have your line peeling off the reel with lightning speed. With a sometimes short rest in between lightning fast bursts of speed these great fish will fight hard right to the end and it makes landing a Spaniard just that little bit more rewarding.

Off the coast of Mackay between the months of July and November the yearly migration of these awesome animals brings them to our doorstep and people come from all over the country to catch that fish worthy enough to brag about. After the very prized table fish, Coral Trout, Spanish mackerel is the second most targeted species by Queensland Commercial Fishermen. So your taste buds can enjoy your catch long after the thrill of the fight it takes land one has worn off.

For a great Spanish Mackerel fishing experience contact Action Charters and book your next trip!

Peter was born and bred in Mackay and has been fishing the area from his home base and all points north through to the Torres Strait since he was old enough to hold a rod. He began his marine career at the age of 18 as a deckhand working on local fishing charters. During this time, he worked towards his Masters and he now has 10 years' experience in all aspects of the industry. For the past three years Peter has been the captain of a live-a-board charter based out of Mackay.

Graham Brake has been fishing the Mackay waters for over 40 years. From estuary lure fishing, deep water jigging and bait fishing to working the remote reefs for GT’s and pelagics, Graham is able to well qualified to assist anglers realise their dream on the water.

Graham is also a published fishing journalist and photographer.

Dion Vail grew up on the West Coast of Victoria where he started working on weekends and school holidays as a deck hand at the age of 15. He traveled all over Australia and overseas when working for the government on fishing boats in NT, VIC and QLD.

Dion spent last 4 years on the Great Barrier Reef as Head Deck Hand, has good knowledge of all aspects of fishing, favourite being soft plastic and lure fishing.